The Longest Run Ever

I went for a trail run the other day. Lately I've only run two miles around my neighborhood, but I decided to kick it up a notch and run along the trail and road at City Creek for three miles. I was feeling pretty good about myself doing the first part of the loop on the trail and the second part on the road. Trotting along next to the sound of rushing water, chirping birds and the quiet of the mountains is better than any iTunes playlist. Plus, it's very peaceful in the morning. I was so relaxed, I even paused to take a photo of these lovely flowers. 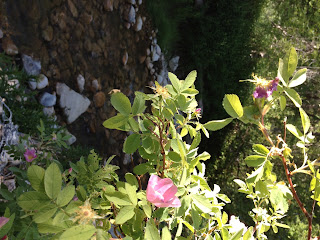 About 100 yards from my car, I reached down and realized my key wasn't in my pocket!

All sorts of things ran through my head. Why didn't I hear it if it fell out? Did the ten almonds I had in my pocket cause the key to slip out? Could it have fallen out while I took the picture? Was I so oblivious I didn't notice that large key thing no longer attached to my hip? I called Carl. He told me to look by the car. I did. It wasn't there. I started to panic a little. I felt the sinking feeling of being stranded.

Reluctantly, I called the dealership. To replace the specialized Audi key I would need to pay $200. What?!

I spent the next three hours going back over my path, talking to people, praying like crazy, crying a bit, feeling sorry for myself, texting Carl to get all the girls to pray and searching desperately for my key. I ran and walked that three mile route two more times (9 miles!). I talked to one of the guys who works in the canyon and water shed area, gave him my phone number and told him about the $200 charge he'd save me if he and his guys found the key.

I was feeling floppy and despondent about two miles into my third journey around that loop. My phone only had 10% battery power left. Thirsty, hungry and filled with shame for losing the pricey key, I started to cry.

Then, my phone rang.

The cheery lady on the line was from the water shed. They found my key! Actually, a trail runner found it about a foot off the path and turned it into one of the workers. I nearly sprinted that last mile to get to the gate at the bottom of the canyon where the guy I originally talked to had my key. When I saw him, I practically threw myself at his feet and kissed them. I didn't though. I said a prayer of thanks and took this picture. 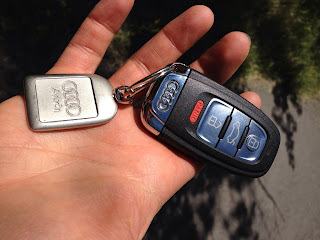 Whether you believe in prayer or not, I know that answers come. Maybe not as quickly as we'd like, but they do come. God understands where we are and what we need. I needed to find that key. He helped me; I know He did. He also helped me run and not be weary and walk and not faint. (Isaiah 40:31)

Last year on my birthday, I made a goal to draw every day. It's been nearly a year and I have four notebooks full of drawings, and a few watercolor sketches. Sometimes I left the drawing to the last minute when I was so tired I could only put a few scratches on the page.

Leaving a task you care about to the very last minute doesn't work—you never do a very good job with it nor give it your full attention. Hurried work made me feel disappointed and dissatisfied. I started to just skip the drawing if I didn't get it in before I was dragging myself to bed. I also learned that it's more important to do the work rather than do amazing work. The act of doing was the journey and the practice that has helped me improve.

After nearly ten months of drawing I feel more confident about my skills as an artist. I even added artist to my description of myself in the "About Me" section on this blog. I have taken assorted classes in drawing, watercolor, 3D, sculpture and design...but I always felt less than because I lacked formal training.

Now, I know that the formal training is just that: formal. I prefer to be informal about nearly everything, so that kind of learning suits me just fine. I'm okay with not being perfect at this and I'm open to learning from people like Kathy Ross, a self-taught 3D artist who sells her sculptures for a living. I met Kathy last year at the Utah Arts Festival. I asked her if she'd mentor me and teach me a little of how she does what she does. She agreed to and we've been in communication off and on ever since.

I'll would love some feedback, thoughts, and suggestions on my art.

How to Make a Roman Shade

Want to make a curtain that looks professional? Try making your own Roman shade. Making curtains is simple and quick...this takes a bit more time, but you'll love the results.

This was my first attempt. I looked everywhere for an easy tutorial, but couldn't find one. My older sister sent me instructions from a book, but I modified them somewhat to my own taste and needs (read: laziness).

Most of the items you'll need are available at your local fabric store. (I go to JoAnn fabrics for all my sewing/decor/craft supplies.) Here's what you'll need to make your own inside-mount Roman shade:

If you have any questions, please ask.

The best conversations with my toddler happen while she's, um...on the potty. Here's what she told me the day her daddy left for a trip.
Posted by Unknown at 9:00 AM 1 comment:

Toddlers are a riddle. Their moods and tastes seem to change frequently making meal time with toddlers a conundrum. Preparing food for a toddler is something of a guessing game. Most of your hard work can end up on the floor rather than in their tummies. Until now. I've found the best way to satisfy the pickiest of eaters is to offer a healthy variety in what I call tapas for toddlers. Getting a little one to eat their meal is less of a struggle and more like a fun-filled adventure when there are plenty of choices. 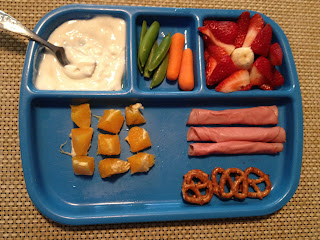 I came up this idea because of the changing tastes of my toddler and I'll keep tweaking it based on her preferences. You never know what your child is going to like. Why waste time making a big meal only to find it on the floor or worse (body paint, anyone?). The idea is to notice which food choice they gobble up fastest. Here are some ideas for tapas for toddlers:
Normally with the example in the photo, she'd go for the strawberries first, followed by the meat. Today, she went straight for the snap peas (see photo), followed by the oranges. The meat and the yogurt were a big fail. Guess we'll be striking those from the menu for a while. I'd love to hear about your experiments with tapas for toddlers. What works for your little ones? 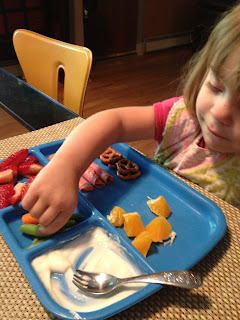